The Christian evangelist must have the special spiritual gift of evangelism from God. Some are given this spiritual gift just as others are given other spiritual gifts and are called to be pastors or administrators in the church. The numbers of evangelists among Christians has been estimated as one in ten Christians, but it is likely to be much lower, I believe. One of the problems in the church today is the assumption that Evangelism is nothing more than Christianized public relations. Some churches would not assume nor have the skill to present the Good News of Jesus Christ to others. This is NOT necessarily what is happening in the Church. All Christians are called upon to be witnesses for Christ, but only a few are called by God, to become an evangelist and to personally bring others to Christ.✞

The Church normally would test these gifts and add their seal of approval to his or her commission alongside other ministers. In the Anglican system, as in The Church Army, the commissioned evangelist works under the authority of his or her local Bishop as well as his or her manager and director in the Church Army Society.✞

Jesus spoke directly to evangelists and pastors when he said in Matthew 28.19-20, "Therefore go and make disciples of all nations, baptizing them in the name of the Father and of the Son and the Holy Spirit, and teaching them to obey everything I have commanded you. And surely I am with you always, to the very end of the age." The French Christian philosopher Blaise Pascal (1623 -1662) wrote, "The serene silent beauty of a holy life is the most powerful influence in the world." Pascal was a child prodigy who amongst other things made great contributions to the study of fluids. While still a teenager he invented one of the first mechanical calculators. He exhibited a rare and intuitive sense of God and the virtue of a holy life.✞

One in Ten Christians 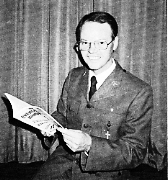 An evangelist is someone who is called specifically by God to professionally share the faith. Dr. Peter Wagner, a well-known church growth expert, and Professor of Church Growth at Fuller Theological Seminary in California has researched this question and discovered that only one in ten Christians has the spiritual gift of evangelism and can exercise that ministry. The evangelist is called to share the Good News of Jesus Christ wherever they may be.✞

The modern definition of "evangelistic" is in a general sense "to be outgoing and enthusiastic." A salesman for a certain product can be said to be as evangelistic as a Christian minister but in a different way. On the other hand, in a church setting an "Evangelical" is a description of someone who is "Biblically conservative." They may also be theologically part of the evangelical movement to be found in many denominations and church groups worldwide. However, being a member of this movement does not automatically make one "evangelistic!"✞

"Church growth" and evangelism may or may not be the result of an evangelist's work as much as it may be a demographic shift or in other cases a divine occurrence. When the Gospel is preached then people repent and turn to Christ in faith or turn away instead. This occurs in evangelism when individuals turn to Christ and become committed to Christ and in turn join a local Bible-based Christian Church. Evangelism is not viewed as just "Christian public relations" as is supposed and practiced by some mainline denominations like the Anglican Church of Canada. To be effective, evangelism programs require a personal response by faith in Christ.✞

Church growth leading to an increase in the number of persons attending a church may be the result of other demographic factors for example when a new housing estate is built in close vicinity to a church and newcomers unexpectantly arrive on the steps of the church.✞