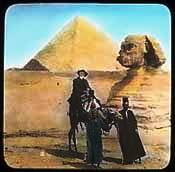 In the days before black and white movies, magic lantern slides were popular in shows in the towns and villages of the new and old worlds. Rural communities gathered in church halls and community centers to see photos of far away and exciting places, people and things. They were intrigued by Chinese costumes, magnifications of a fly's eye and other such wonders! The images were projected on to a large screen or hung white sheet presenting a fascinating view of life around the Victorian world. Audiences thrilled to see the slides of British or American soldiers like the famous General Custer before the Battle of Little Big Horn or of the British fighting against the Boers in South Africa. They were amazed at the bushmen from Borneo or strange looking animals in Australia. Many magic lantern slides were painted by hand to add excitement to what was then a very drab and hard life on the frontier farming towns and villages in both Britain and the Colonies. This form of entertainment was quickly overtaken by black and white silent pictures and then colored movies with sound. The lantern slide owed its existence to the photographic pioneers of the seventeenth, eighteenth and nineteenth centuries. The earliest popular form of photographs from 1839 was known as daguerreotypes which were produced on polished copper plates. Thousands of photoshops sprang up around the country to provide portraits, visiting cards and family pictures using this process. This was followed by a less expensive method of capturing an image on tin plates called tintypes and later glass plate negatives called ambrotypes backed with black paint, paper or cloth to project a positive image. Many important business people and politicians had visiting cards made with their image on them.✞

The magic lantern slide commonly came in two different sizes and used two different types of projectors lit by oil and later by electricity. The English version used three and one quarter inch square plates and the American five inch by three and a quarter inch format. The P. L. Spencer Collection, like the slide above of the Emperor of Japan, is of the English type and size and includes many hand-colored as well as black and white images of exceptional quality. There are 2,300 magic lantern slides in the P. L. Spencer Collection.✞