So why the concern about the church of 2019 AD? In a word, our Anglican Diocese of Toronto will shrink by then to a fraction of its original size, possibly to one third. The gray-haired Elders in our congregations are aging and dying, but church baby boomers will not replace them. By 2019 AD instead of the present 273 parishes in Toronto Diocese, we will likely have around 96. Rather than our 259 Parish Clergy, I project we will only need 133. This estimate is not an exaggeration, based upon our present churches' effectiveness, established trends in society and the current demographics.✞

Let us compare yesterday's church with that of 2019 AD. Our present "Elders" group with their leadership skills, financial assets, and influence will be primarily gone from power. There will be few boomers there interested in replacing them or supporting the institution. There will be little or no funds to keep redundant churches open to amalgamate or combine. Many churches will be closed and sold because the baby boomers have characteristics like "spirituality" and a need for "meaning in life" but not of "attending or supporting an institutional church." A city like Peterborough, Ontario of seventy-eight thousand people presently has six Anglican churches (in 2019, only three remains) may end up in 2019 A.D. with only one or two facilities. Parish income will drop radically, maybe to a third of the present levels. This fact is a challenge and also should be an inspiration to new action. Unfortunately, our church leaders seem to be able only to manage our shrinking resources and not initiate growth.✞

The Churches in North America are being transformed from fourteen to three percent of the population in the next decade. As an example of what the future will probably hold for Church Populations, we may look at a town like Peterborough in Ontario, Canada. The church map could be transformed with one Anglican church population supporting one building, with possibly a second smaller mission church location elsewhere.✞ 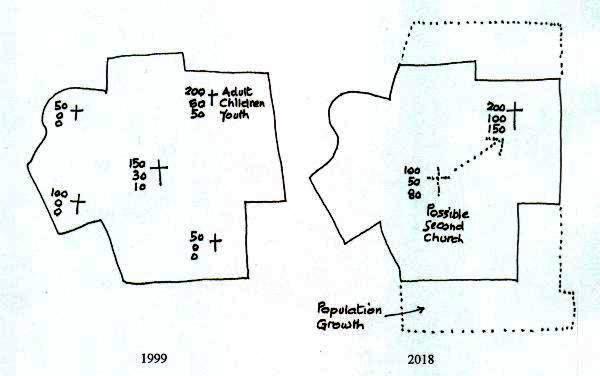 By 2019 according to the statistics, Anglicans will have become a denomination similar to the Episcopal Church in the United States, representing just three percent of the population. According to Statistics Canada, today's mainline Church relies on support from ten to fourteen percent of Canadians. Still, I would forecast it will shrink to three percent population as in the USA Between now and 2028, about two-thirds of the Anglican churches in the Diocese of Toronto will be closed. One Anglican Church in one town will become a reality, but not a necessity, or there may not be any. As happens now, people will drive past numerous church buildings to one of their likings. ✞

The number of mostly small suburban churches will decrease. City churches will probably fare better. They will not have large enough congregations, but they may have other substantial resources to sustain them, including air rights money or valuable property to sell. The Diocese of Toronto will have a few large, some medium but not as many small congregations drawn from their three percent share in the population. All will have lower incomes and fewer leaders. Those without vast financial reserves will be unable to continue. Smaller modern churches with low overheads will probably last longer than larger stone buildings with higher maintenance costs. The Diocese will be unable or unwilling to offer substantial financial help for failing churches.✞

Christian Baby Boomers will have an influence on future church society as well as in secular life. The situation in the Church at large will be made worse by the replacement of supportive "Elders" in leadership positions in society with secular individuals or at best "Baby Boomers." These new Baby Boomer executives in municipal, provincial and national governments are unlikely to be as sympathetic towards the churches as their Elder predecessors. They will undoubtedly tax churches heavily as well as church properties. Baby boomers will demand the requirements for accessibility, including church elevators, modern industrial style kitchens, and upgraded washroom facilities. If the 2014 property taxes on a $500,000 house are $5,000 a year, the tax on a church building assessed the same as a business is likely to be $25,000 a year, which will effectively close many small churches.✞

Taxes will cripple many church budgets, especially when other income is shrinking and expenditures are growing. Unsympathetic governments will remove tax advantages like housing allowances for clergy and breaks on realty taxes on church buildings. The writing is already on the wall with clergy paying taxes on parish house utilities. The charitable status of religious organizations will decrease until they are just another business. The combination of spiraling property tax and maintenance costs together with falling income and declining congregations will be the death-knell to many neighborhood congregations, both large and small. These are the effects of the demographic shift.✞

Baby Boomers will show their diminishing desire for initiation rights and baptisms, weddings, and funerals within the churches. One of our local Anglican churches reported at the end of 2014 a record for the year of 0 weddings, one baptism, and 11 funerals! On the other hand, there will be an increased desire for unusual sometimes weird ceremonies to mark the birth of a baby, the joining of two people in a common-law arrangement, and wake ceremonies in gardens, restaurants, boats, and under favorite trees. These reflect the needs for a quirky kind of spirituality in both the Boomers and Millenials. Churches could react by designating a few redundant churches as "Marriage Chapels" as in Las Vegas as businesses or grieving centers, though funeral homes already take this territory. Funeral Companies are finding it increasingly difficult to make ends meet because people do not want the bells and whistles anymore. Being able to conduct baptisms, weddings, and funerals wherever the family requested would bring competition to the banquet hall business. Churches will need to compete commercially with other wedding facilities to win back the notion of the Christian Wedding. The Boomers will come to church weddings if we can be flexible and make a sound financial case. We need to offer people what they want but within specific Christian parameters. Our institution will need to become more flexible and loosen our rules as to the location but not the content to meet these new challenges though this is already happening.✞

Boomers and Millennials will continue to be terrified of death and shun funerals and funeral parlors. , In the future, eternal life will have little relevance with their emphasis on living life "to the max" right now. Our first opportunity for evangelism in the coming years will likely be teaching Christian meditation and spirituality through house, table, and other small groups.✞