What could change this outcome? Is it possible to re-gear our present shrinking Church life to meet this challenge? As was experienced in Toronto East Deanery some years ago, parishes can flourish with a concentrated effort. Evangelism Committees in each of the twelve churches that I engaged with planned and developed new development projects. After two years, it was the only deanery in the diocese to have a thriving youth ministry and an active Sunday school in every parish. This kind of development takes a significant change in mindset, which is very difficult to achieve, especially in most family-size Parish Churches led by dominant matriarchs and patriarchs. In rural and program parishes, the clergy have a more significant opportunity to effect change, but even this is not easy, especially in the long term.✞

Another internal possibility is that "revival," which is a work of God, could transform ordinary Christians' spiritual lives and attitudes and empower them individually for ministry. Instead of doing church as we do business, God the Holy Spirit would lead Christian people. Repentance and spiritual awakening would be the first things we would desire. This new spirituality would meet the needs of the Boomers, Generation X'ers, and Millenials who crave with all their hearts spiritual meaning. We could be the medium that God wants to use, but first, we must experience spiritual reformation and the indwelling personal Jesus for ourselves.✞

Demographic casualties from the shift could have a significant effect on the baby boom generation. One other internal development could produce a mass return to the church. A major land-based war with significant Canadian casualties or a major catastrophe of some kind could cause a large increase in church membership, similar to the boom in attendance after World War II. However, it is doubtful that our new breed of public relations-conscious Boomer politicians could stomach this or would allow this eventuality to happen in Canada. Secular societies have no stomach for war.✞

Only the very best parishes will survive the Demographic Shift in 2019. There will be few medium-size churches for large Anglican churches not found in Toronto Diocese apart from the evangelical Chinese Churches with their own Bishop. Many small and family-sized churches will be closed, especially in the rural areas and in the suburbs. The staunchly conservative and charismatic churches that are left will probably do better as the Millenniums seem to be more attracted to them. The Diocese of Toronto will have ninety-six parishes remaining and approximately 133 members of the clergy.✞

Surviving parishes will have a hard time maintaining their buildings without the wealthy elders who once populate many churches. If they come, the Millenniums have little in the way of extra resources to give, and many churches have little or no savings to use.✞ 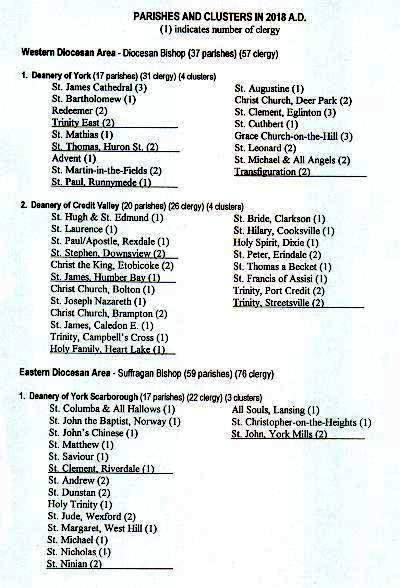